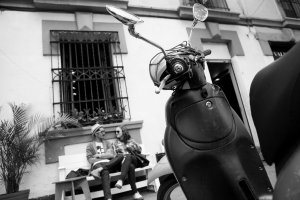 As I’ve noted on various occasions the once sleepy and apparently despoiled Colonia Roma is on the rise. It seems there is a new bar/café/restaurant/gallery or trendy boutique on every block. It’s OK with me: if the residents can’t keep the trash off the streets and their homes in decent repair maybe some new energy is needed. Here, I’m all for gentrification, if that’s what you want to call it. I’m not worried about the New York-style throw-the-old-lady-out-on-the-street, turn-the pharmacy-into-a-Starbucks phenomenon. We’re a long way from that. But give those old Grande-Dame mansions and Nouveau beauties a little respect and bring in some good food. I’ve already lauded Rosetta and Sobrinos in these columns, and now there’s Broka.

Chef Marco Margain, D.F. born and bred, has opened an intimate bistrot/bar in the downscale ‘SoAo’ (south of Alvaro Obregón) side of Roma, facing the nearly-nice Plaza Luís Cabrera. It is surrounded by several uppity but less successfully realized ventures, and near two neighborhood classics (La Embajada Jarocha and Pozolería Tizka). Broka, whose name refers to the Norteño way of saying ‘brother’, is the best thing going in the area.

I chatted with Chef Marco during a rare quiet spell– the joint jumps from morning ‘til night. The chef, who studied in Monaco and Spain, explains that he wanted to create a space honoring the true meaning of the word ‘restaurant’, that is, to ‘restore’. “I want to make food with care and love, like your mother would”, he says, adding “I want the visitor to feel at home”. Hence the one-dish menu: comida consists of an appetizer, a main dish, a dessert and a drink all for 100 pesos ($130 with wine). No choices, although special diets, such as vegetarian, will be catered to. Marco explains that his cooking “was not ‘contaminated’ by one culture”; he learned and took from many.

His food is not ‘fusion’ – a dirty word these days, often implying the hapless mélange of every imaginable ingredient and cultural reference. Nor does he aspire to foamy, drizzling pretention. Dishes are simple and bright. A ‘carpaccio de mango’ turned out to be just that, simple mango slices tweaked by some gentle chile slices and mint leaves. This was followed by ‘pollo oriental’, perfectly done linguine tossed with chunks of chicken in a sweet and savory teryaki-like sauce and smartly presented with a scattering of thin spinach strips. While no particular cuisine is featured here, Italian seems to be a liet motif. The chef goes on: “Sometimes I invent dishes, but I also like to do the traditional; my sopa de lima is straight from the Yucatan. I shop in the neighborhood and buy what is inspiring and seasonal.” Creative lasagnas, Moroccan couscous, one never knows what to expect, as the menu changes daily. “We have been successful beyond my wildest expectations,” Marco muses, “and all by word of mouth; some people come several times a week”. Lunch is not all there is, however. After an early evening rest for the staff, the small space, tastefully designed in retro-wood and muted grays by http://www.baseporaltura.com, becomes a ‘bar de tapas’. Well-chosen and reasonably priced wines and ‘tapas’ are offered. Chef Marco elucidates: “my tapas have nothing to do with Spanish tradition other than to feature small plates of interestingly combined tastes to complement the drinks”. Plates are only 10 pesos and up to eight different combinations are offered.

Ambience is jovial but adult, music eclectic and sophisticated – jazz to soft indie rock doesn’t overwhelm. One caveat: Service, in typical Mexican tradition, is friendly but a bit over-diligent; I would like my plate to remain in front of me for more than 30 seconds in order to sop up the remains with the excellent bread. But that’s only a detail. Bistrot Broka is a welcome addition to the neighborhood and I wish them all the best.Bistrot Broka

A Note to my readers:
Gastronomic sleuth and re-pat Lesley Téllez has opened a new food tour business, Eat Mexico, specializing in tours of ‘the real thing’….see http://www.eatmexico.com/ for more information.

Nicholas Gilman was born in New York City. Traveling to Mexico City to study the mural movement he became interested in the traditions of Mexican painting and culture. He worked as an assistant curator at the Hispanic Society of America for several years and later enrolled in The New York Academy of Art to study classical painting and sculpture. A painter as well as a food writer, he has shown his work extensively in the USA and Mexico. He has studied gastronomy at UNAM, cooking at the Universidad del Claustro de Sor Juana, is a founding member of a Mexican chapter of Slow Food International, as well as member of IACP (International Association of Culinary Professionals). Amongst his media appearances, he has been a guest on NPR’s The Splendid Table and Around the World radio. He has written a weekly restaurant review column for The News, Mexico’s English daily, and his work has been published in The Christian Science Monitor. He was editor and photographer for the book Mexico City: An Opinionated Guide for the Curious Traveler, and in 2007 published Good Food in Mexico City: A Guide to Food Stalls, Fondas and Fine Dining, which won the Gourmand Cookbook award. He lives and works in Mexico City.

View all posts by dondecomere